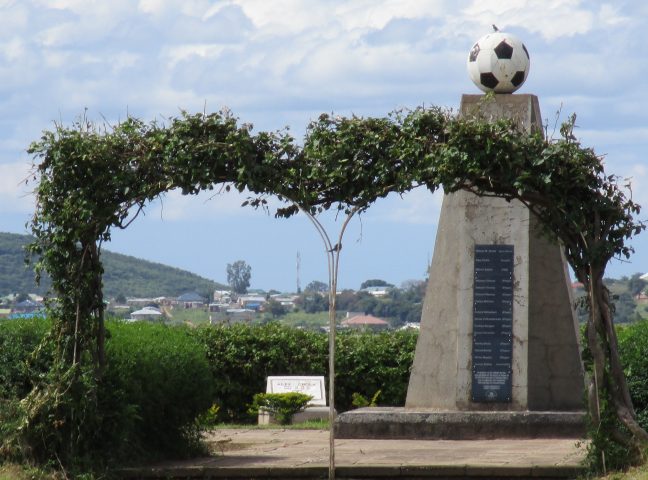 Along with Hafia teammate, Mamadouba (Maxime) Camara, Sory Keita participated in the African team that contested the Brazilian Independence Cup, organised to celebrate the 150th anniversary of Brasil’s independence in June as well.

This tournament appears to explain some African Player of the Year (APotY) anomalies, although that appears to be a stretch too. The reasons will be detailed in later articles. However, Camara did not feature in the APotY top ten despite winning the Guinean League and African Cup of Champions Clubs as well. Souleymane did not make the trip to Brasil and topped the list. He was not alone in not playing in that tournament but doing well in the APotY vote.

But what about second place?

According to France Football Magazine, TP Mazembe’s Zairean stalwart, Raymond Bwanga Tshimen was the second-best African player in 1972. He certainly had a big reputation. But what did he win?

In 1972 the answer is nothing. Huge rivals and defending Linafoot (Zairean League) champions, AS Vita, won the league again. And against all odds, neighbours the Republic of Congo (formerly Congo-Brazzaville) won the Africa Cup of Nations, beating Zaire on the way.

Bizarrely, their best player – already playing in France – François M’Pelé, who went to Brasil as well, was conspicuous by his absence from France Football Magazine’s list as well. He wasn’t the only surprising absentee.

Fantastic player that Tshimen undoubtedly was, what had he done to place so highly in the 1972 APotY Award?

But it would get worse. 1972 was a bizarre year in France Football Magazine’s APotY voting. Despite winning the award in 1971 African great, Ibrahim Sunday thought so too.

“I played against Chitalu,” Sunday said.

In 1972 TP Mazembe did not win the Zairean national title (Linafoot). Nor had they won it the previous season. That meant that Mazembe should not have competed in the African Cup of Champions Clubs, although the decision on which club would play was up to the Football Association of that country.

Tshimen, at least played in the Africa Cup of Nations – Zaire knocked Zambia out in the final round of qualification in 1971. Zaire finished fourth. Tshimen was at least visible, but what had he done to finish second in the African Player of the Year award?

Mazembe were eliminated in the semi-finals of the African Cup of Champions Clubs by Hafia, as they refused to play the second leg.

Tshimen had played one more match than Chitalu in the competition. He had not won it. In fact, he won nothing in 1972 while Chitalu had won a Charity Shield, three Cups and Zambia’s league, as well as set two African Cup of Champions Clubs records and two world records.

Yet France Football Magazine decided that Tshimen had had a better year than Chitalu. Really? It was beginning to look like a reputations and favourite players contest rather than a recognition of the best players in a particular year. A case can be made that Tshimen belonged in the top ten that year, but second place?

Meanwhile Chitalu and M’Pelé were not even in the top ten and nor was M’Pele’s Congo teammate, Jean-Michel M’Bono, who excelled in the AFCON Final against Mali.

[1] Hafia won the African Cup of Champions Clubs for the first time in 1972. They were like the Ghanaian team Real Republicans. Ghana’s first President, Dr Kwame Nkrumah, wanted a club team that was effectively the national team. They raided other club teams for players and managed to effectively have the national team playing as a team in the Ghanaian league. That gave them match fitness and practice throughout the season.

Real Republicans were disbanded after the February 1966 coup in Ghana which toppled Nkrumah. They never got the chance to play in the African Cup of Champions Clubs. Ironically, the tournament was at first named the Kwame Nkrumah Cup. Guinea’s President Ahmed Sékou Touré was a great admirer of Nkrumah. He adopted much from Osagyefo, including his thoughts on football.

So, Hafia became a Real Republicans of sorts in Guinea. Named Honorary Co-President of Guinea, Nkrumah didn’t live to see his idea bear fruit in Guinea. He died in exile in April 1972. Hafia became Champions of Africa for the first time on December 22nd 1972.